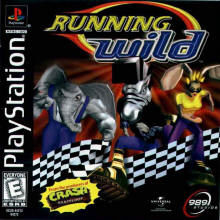 Join the Stampede!
Stomp, snort and howl with the wacky racing fun of Running Wild! Blaze through incredible obstacle courses with 6 of the zaniest and craziest characters ever created, including a rip-roaring Bull, a sleek Panda and a speedy Zebra. Embark on a race with up to 4 players or go it alone, but watch out for opponents trying to run you off the road!
Magical power-ups and hidden secrets create special powers to assist in your quest to cross the finish line first. Precision character controls and lightening fast racing action combine to form the wildest character racing game yet!
Special Features Include:
6 wild and crazy characters, each with special racing styles and skills.
Incredible 3D graphics speed your way at 60 frames per second.
Race through 4 thrilling (and 2 hidden) courses, including a flaming Volcano, a snowy Arctic, and a hot and dry Desert.
Power-ups include the ability to grow big, fly, pass through objects or turn other players' worlds to mud.
Precision character controls provide a realistic racing feel.
Hidden pathways, faster shortcuts, secret ways of running the tracks, and more!
DEVELOPER COMMENTS:
"Running Wild was mostly the brainchild of the development studio Blue Shift. Universal Interactive had bootstrapped Blue Shift which was founded by some old school coin-op guys whose credits include Paper Boy, Rampart, and Gauntlet. They took a very coin-op arcade action approach to Running Wild and wanted to try something new with racing. At Universal we were very into character games such as Crash and Spyro the Dragon so this combination worked for both parties.
Blue Shift worked very hard on the engine and Running Wild is one of a handful of full 3D titles that runs at 60fps on PSX. While this definitely aided the sense of speed, maintaining 60fps put a lot of constraints on the track design so that was tricky.
We iterated on the controls a *lot*. For instance, one of the things that generally makes racing games interesting is friction, or how the vehicle slides when you turn (oversteer and especially understeer). When we added understeer to the characters however, they looked very strange and wrong, sliding sideways while running. Eventually the game evolved to be more about jumping and finding the rhythm of the track, rather than perfecting a friction model. This made the game actually quite a bit of fun to play but caused problems with lack of depth - once you knew the tracks there wasn't that much room for improvement outside of executing the jumps.
In order to get more challenge, the Blue Shift team kept making the game faster and faster... again the 60fps framerate helped to make this possible. In its final version, the game is incredibly fast-moving, and is worth checking out just to experience this.
The Blue Shift team had a very creative track designer (Brian Allgeier) and art director (Raul Dominguez) who made the environments a lot of fun to experience. Brian joined Insomniac Games where he designed many fantastic levels for the Spyro and Ratchet games and still works there as Creative Director.
Ultimately Running Wild was not a great game, and as Mad Dash racing proved a few years later on Xbox, 3D character racing games like this just don't work very well. While character racing games abound (Mario Kart, Crash Team Racing, etc) they are almost always done in vehicles, IMO because that allows the use of a friction model and understeer. Still though, Running Wild is worth checking out for a unique sense of speed and a fun, creative (albeit failed) experiment with a new type of arcade racing." Michael John, Universal Interactive Producer 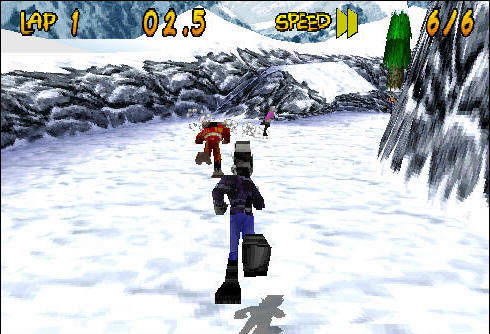 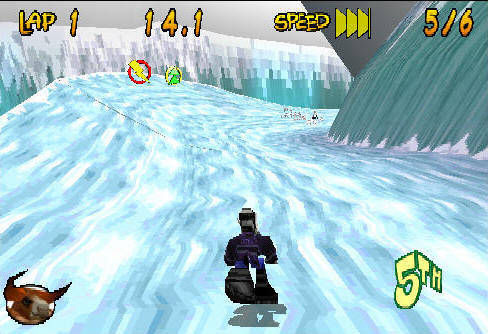 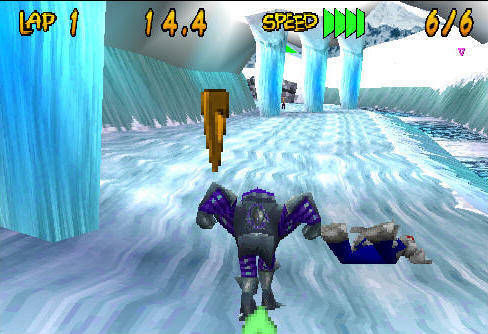 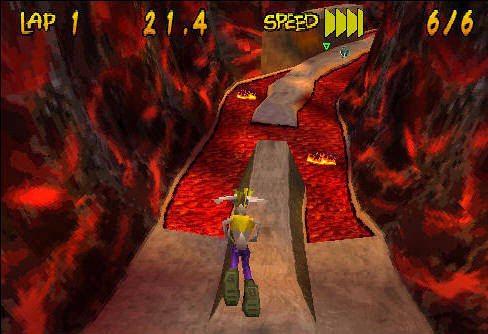 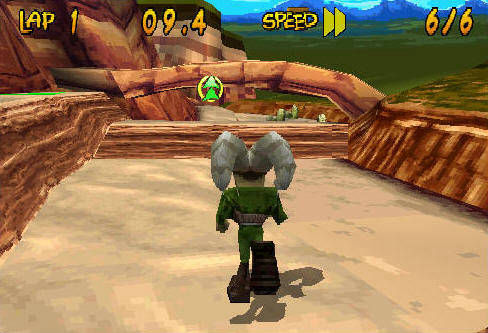 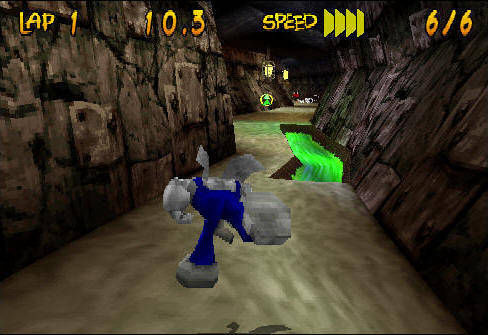 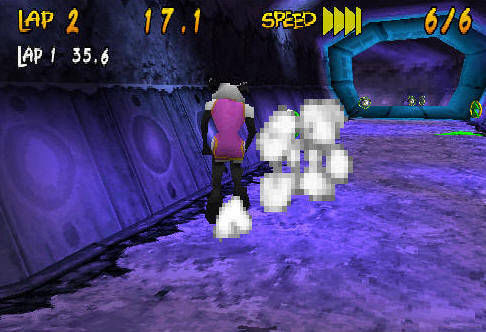 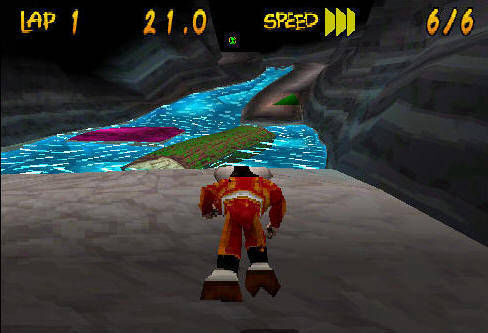 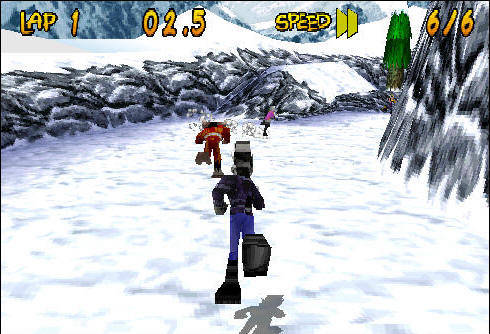 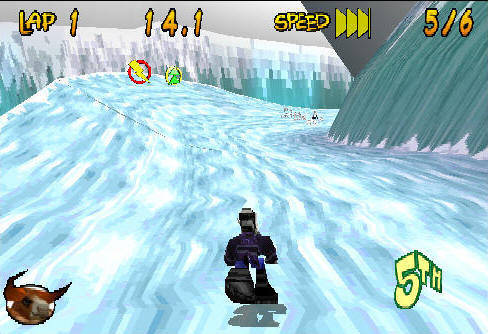 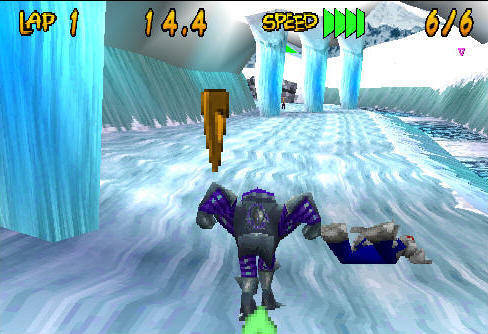 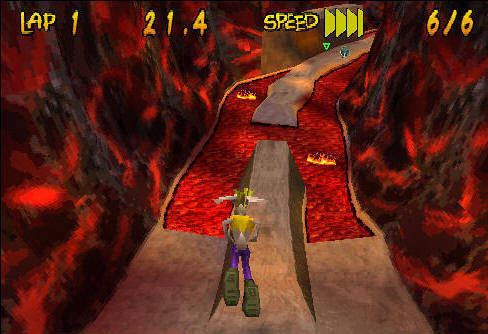 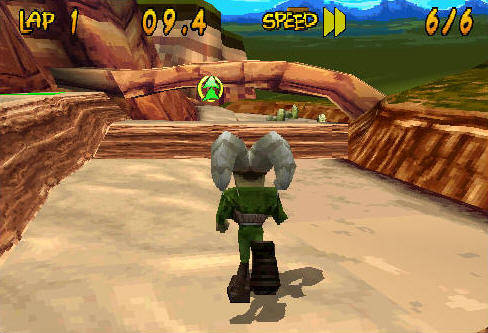 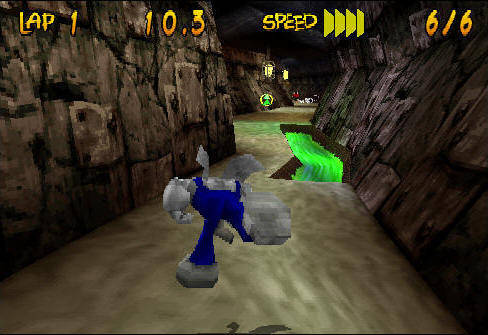 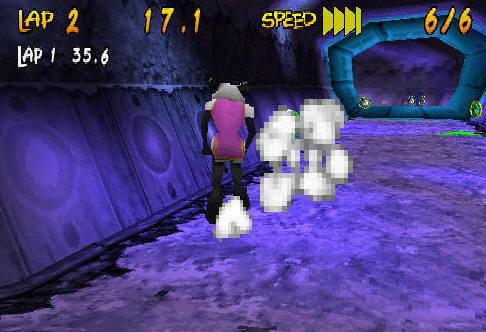 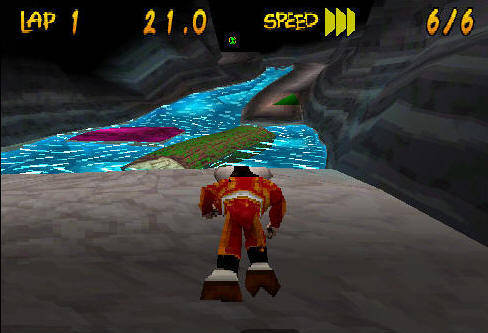